Who said this was about football? 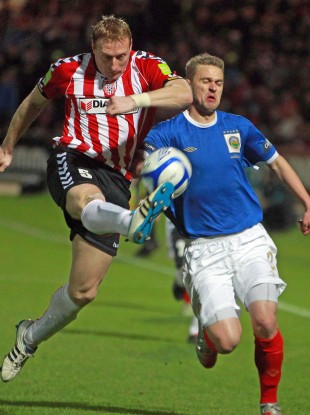 Getting riled up to the point of spleen fulmination over the fortunes of one’s favourite football team, or worse those of a rival’s, is something that I will never fully understand. Despite the musing of former Liverpool manager Bill Shankly, football is not more important than a matter of life and death, let alone a matter of life and death in itself. Nevertheless, I enjoy it – it is my favourite sport to watch and play – and it pleases me to see a team or player that I support doing well. Likewise, I am prone to a momentary feeling of disappointment when the opposite transpires.

So when Derry City overturned a one-goal deficit last night at the Brandywell to defeat Irish League champions Linfield by three goals to one in the Setanta Sports Cup (they won by four goals to two over two legs), a smile developed across my face and I can imagine the natural feeling of deflation felt by Linfield fans.

However it is not the events of the game or the implications of Derry’s victory which dominated headlines today, since the spotlight was hijacked by groups of violent supporters intent on destruction and possibly worse. Sinn Féin councillor Patricia Logue said that Linfield fans went on a ‘sectarian rampage’, while Derry City director Martin Mullan is said to have been chased by a mob of Linfield supporters after he tried to help diffuse the situation: ‘I’ve never been as scared in my life.’, said a shaken Mullan after the game, ‘I’d like to thank [Derry City F.C.] stewards for saving me.’, he concluded.

On the basis of those accounts alone it would appear that a skirmish erupted as blood-thirsty Linfield fans spilled out of the stands and into the streets, but when one examines the accounts of Linfield fans it is clear that there is an idiotic ‘hardcore’ within both sets of fans and they are complicit in the violence (and that’s not to mention the fact that City fans were guilty of destroying seats at Windsor Park).

During a discussion of the events of the evening on Mark Patterson’s Radio Foyle show, a Linfield fan described a situation where his fellow supporters were pelted by stones and subjected to abuse as they left the stadium, and “only a handful” retaliated. According to Progressive Unionist politician Billy Hutchinson, buses transporting Linfield fans from Derry were also damaged by the unnecessary stone-throwing of mindless individuals. The Linfield fan went on to criticise what he termed “part-time” Linfield supporters and, interestingly, raised the issue of lax policing, as drunken supporters were allowed to board buses to the game.

It has been suggested by some that friction only seems to occur when Derry City play Linfield, but this is misleading. Only recently there was tension between Sligo Rovers and Glentoran fans which resulted in a bus being broken into, while there were also issues when Glentoran and Linfield fans travelled to Dublin to play Bohemians and Shelbourne. This is not confined to Derry.

Nevertheless, it is possible that the friction between Derry and Linfield might be greater, in part, as a result of Derry, a northern club, playing in a different league to Linfield. Derry City is a League of Ireland club, by virtue of being removed from the Irish League due to problems arising from sectarianism and security concerns four decades ago, and as such encounters with Linfield do not happen frequently. Therefore, the rarity of such encounters inevitably adds to the spectacle. This coupled with the fact that some fools erroneously equate the fixture to an Irish “Old Firm”, attracts the dregs of society, or what the aforementioned Linfield fan diplomatically termed “part-time fans”, to the Brandywell.

It can be avoided, despite the deeply entrenched socio-political reality that exists, and with luck another all-Ireland sporting competition will be allowed to prosper to the benefit of both fans and clubs. What needs to happen is mature self-moderation within the fan base. Those who seek to sully the reputation of the football team they purport to support by instigating or encouraging sectarian hatred should be censured by the club and indeed the fanbase. Statements from supporters’ clubs issuing a savage criticism of such behaviour would be a welcome start. Wishful thinking?