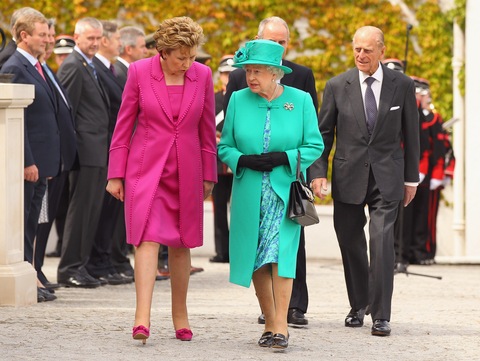 Try as I might, I cannot understand the fawning over the Queen of England.

Political leaders from the DUP, UUP, SDLP, Alliance and TUV praised Elizabeth II for, well, managing 60 years on the throne. Some spoke of how much respect she deserved. David Ford described her as a “rock of stability”, while the volatile dissenter Jim Allister said: ” in [Elizabeth II] there blossomed a monarch who, throughout times of great change… has demonstrated a steady touch and a steady hand, through which many and all of us have benefited.”. Woah! She must be a great woman!

So what has she done?

I suppose she has travelled around with her husband over the years, which can get tiring, I’m sure. Oh and then there is the fact that she has to live in luxury, which must be a bit of a slog. And the mortifying shame of her sons’ separations, not to mention all those public duties, which take their toll you know. But fair play to her, she has demonstrated “a steady touch and a steady hand” throughout it all.

The very institution that Elizabeth II represents is one which is founded on a principle of inequality and ruthless subjugation and to vaunt the British monarch in such a fashion simply reinforces the position of such an archaic system. In truth, she and her family form what is unquestionably an undemocratically-appointed feudal relic, which should not have a divinely instated place of privilege in today’s society.

Yet we continue to see mindless appreciation and ludicrous suggestions of how this lady somehow “deserves” a “gift from the nation” in the form of a yacht. Yes indeed. According to the Guardian, Michael Gove, the British Secretary of State for Education actually said: “”In spite, and perhaps because of, the austere times, the celebration should go beyond those of previous jubilees and mark the greater achievement that the diamond anniversary represents.”. Luckily for the British people, the idea was rapidly shot down, but that an elected representative felt that it was at all worthy of consideration is, in itself, alarming.

Perhaps a little more worryingly, this mindless appreciation was also evident in Ireland when Elizabeth II visited the island in 2011. Such was the level of pro-queen media furore and clamour surrounding the event that of any kind of derisory talk regarding the Queen was branded the utterance of a crazed extremist. Strange behaviour from the inhabitants of a republic that was only freed from the shackles of British rule and its monarchy early in the 20th century. Perhaps it is little wonder that Ireland (that is, the independent 26 county state) is dying.

In this sense I welcome Sinn Féin’s silence on the matter in respect of the praise of the others. It is not, as Jim Allister says, “stony and churlish”, nor is it necessarily “vindictive”, (even if vindictiveness might be excusable – Elizabeth II is, after all, the symbol of the state which slaughtered and oppressed many Irish people in recent history). It is a dignified silence.

Well, the opposite is also true. There is a large number of people in the north who don’t value the link with Britain, and who don’t value the monarchy, let alone any notional contribution of Elizabeth II. Why don’t people acknowledge that and fully respect that?

One Response so far.