From Russia with… Hope. 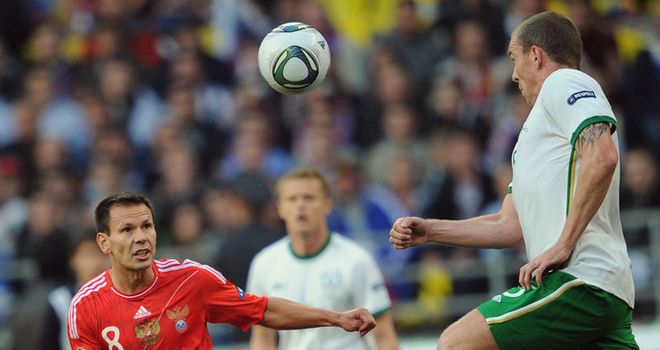 Richard Dunne is the kind of player you want in your team. He’s a fearless warrior who leads by example, inspiring his comrades to rise above their stations and his all-action performance in Moscow consolidates his position in the pantheon of Irish sporting legends. Even the great Paul McGrath has bowed in respect of his efforts. However, the result of 0-0 is ludicrously deceptive.

In a sense, the heroics of Dunne distract from the problems and limitations of the team as a whole: left back and central midfield are still headache positions. Stephen Ward, a player who many felt capable of filling the void, was caught out too often defensively and his contribution going forward was utterly abysmal – his failings forced a performance out of Aiden McGeady. Indeed, at times he made Kevin Kilbane look exceptional. In midfield, of Glenn Whelan and Keith Andrews, the latter clattered and lumbered his way about the pitch throughout the game, broadcasting his inability to time a tackle or play a decent pass. Yes, he can block a shot, but so could a dummy. As for the former, I’m not sure if he even put his foot on the ball.

Like so many Irish fans, I grew frustrated as I painfully watched the unfolding of the game on RTÉ. Darragh Maloney’s meek acceptance of inferiority didn’t help my frustration either, as he happily declared it a marvelous achievement to have not conceded a goal. No Darragh, that is not what Ireland should consider an achievement. Nor is stringing several passes together and creating no chances (that’s right no chances) to be construed as a “bright spell”. A bright spell is dominance of possession, shots on target and an achievement, in my eyes, is a win.

In the end, what Trapattoni will be judged on, is whether or not he was able to guide Ireland to the final stages of a major competition. He came close in Paris, 2009 and is doing just about enough in the current campaign. Ireland’s chances of qualification have been aided considerably by the increasingly capricious nature of international football. Group B is one of the most open qualifying groups I’ve ever seen. Indeed, who could have predicted Slovakia defeating Russia away only for them to lose 4-0 at home to Armenia? In this regard, Trapattoni has been ridiculously lucky, but that’s football. Or maybe it’s all the praying he does. St Patrick helped this time, he says. Who knows?

After the dire performance which led to a draw at home to Slovakia, I forsaw a draw or a loss to Russia and an end to Ireland’s qualification hopes. We saw a repeat of the performance, but luckily Richard Dunne was there to back up his talk with action. And robust action it was, enough for 11 men, but I never imagined that Slovakia would be trounced by Armenia in such a fashion at home. My cynical genes have since been softened by a spurt of cautious optimism, but Ireland still have to beat Armenia at home, which won’t be as easy as some might expect. Armenia have scored 17 goals and only conceded one more than Ireland in this group. They defeated Slovakia convincingly both home and away, while Ireland only managed draws.

It’s there for the taking, but remember, as they say in the business, it’s a funny old game.